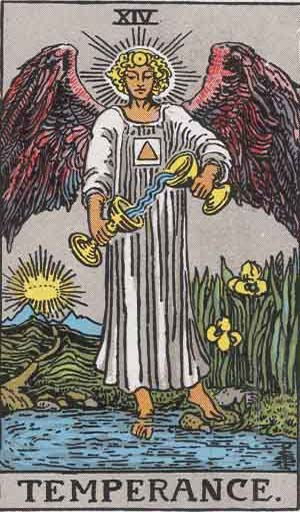 A winged angel, with the sign of the sun upon his forehead and on his breast the square and triangle of the septenary. I speak of him in the masculine sense, but the figure is neither male nor female. It is held to be pouring the essences of life from chalice to chalice. It has one foot upon the earth and one upon waters, thus illustrating the nature of the essences. A direct path goes up to certain heights on the verge of the horizon, and above there is a great light, through which a crown is seen vaguely. Hereof is some part of the Secret of Eternal Life, as it is possible to man in his incarnation. All the conventional emblems are renounced herein.

So also are the conventional meanings, which refer to changes in the seasons, perpetual movement of life and even the combination of ideas. It is, moreover, untrue to say that the figure symbolizes the genius of the sun, though it is the analogy of solar light, realized in the third part of our human triplicity. It is called Temperance fantastically, because, when the rule of it obtains in our consciousness, it tempers, combines and harmonises the psychic and material natures. Under that rule we know in our rational part something of whence we came and whither we are going.