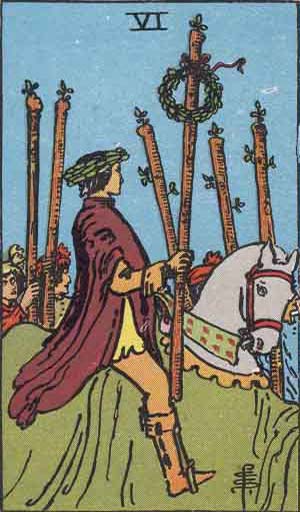 A laurelled horseman bears one staff adorned with a laurel crown; footmen with staves are at his side.

Divinatory Meanings: The card has been so designed that it can cover several significations; on the surface, it is a victor triumphing, but it is also great news, such as might be carried in state by the King’s courier; it is expectation crowned with its own desire, the crown of hope, and so forth.

Reversed: Apprehension, fear, as of a victorious enemy at the gate; treachery, disloyalty, as of gates being opened to the enemy; also indefinite delay.